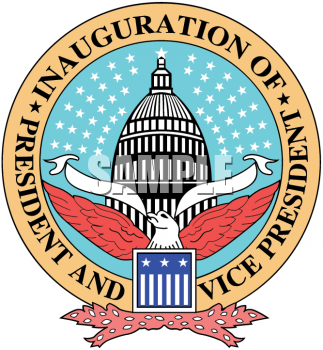 Speaker of the House (D-California)

The only inauguration element mandated by the United States Constitution is that the President make an oath or affirmation before that person can "enter on the Execution" of the office of the presidency. However, over the years, various traditions have arisen that have expanded the inauguration from a simple oath-taking ceremony to a day-long event, including parades, speeches, and balls.

Inauguration procedure is governed by tradition rather than the Constitution, the only constitutionally required procedure being the presidential oath of office (which may be taken anywhere, with anyone in attendance who can legally witness an oath, and at anytime prior to the actual beginning of the new president's term). Traditionally, the president-elect arrives at the White House and proceeds to the inaugural grounds at the United States Capitol with the incumbent president.

Oath of the Office of the President of the United States:

Before he or she enter the Executive of his or her Office, he or she shall take the following Oath or Affirmation:

This clause is one of several that employ the oath concept, but it is the only clause that actually specifies the language of an oath of a constitutional officer. While the Oaths Clause in Article VI simply requires the persons specified therein to "be bound by oath or affirmation, to support this Constitution," the Presidential Oath Clause requires much more than this general oath of allegiance and fidelity. This clause enjoins the President to swear or affirm that he or she "will to the best of [his or her] ability, preserve, protect and defend the Constitution of the United States."

Immediately after the presidential oath, the United States Marine Band will perform four ruffles and flourishes, followed by Hail to the Chief, while simultaneously, a 21-gun salute is fired using artillery pieces from the Presidential Guns Salute Batter, 3d United States Infantry Regiment "The Old Guard" located in Taft Park, north of the Capitol. The actual gun salute begins with the first ruffle and flourish, and 'run long' (i.e. the salute concludes after Hail to the Chief has ended).

The United States presidential inaugural balls are large social gatherings, both white tie and black tie, held to celebrate the commencement of a new term of the President of the United States. Planned and sanctioned by the Presidential Inaugural Committee, the official inaugural balls occur throughout the evening of Inauguration Day in the Washington, D.C. area and are invitation-only, attended by guests who are issued pre-paid tickets. The President, First Lady, Vice President and his or her spouse, all make personal appearances at each of the inaugural balls held in their honor. Catered food, beverages, and live entertainment performed by national and globally acclaimed musicians are provided at the inaugural balls.

Other inaugural balls, unofficial and often less formal that occur before and on Inauguration Day, are given by state societies, businesses, and private organizations.

Live Coverage of the Presidential Inauguration 2021:

weather for Washington DC
Powered by